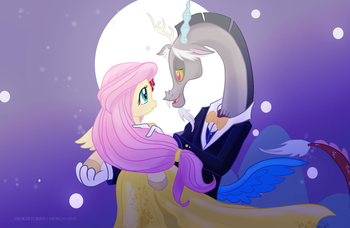 Embrace the Chaos of the Night

What do you get when you mix My Little Pony: Friendship Is Magic with Beauty and the Beast? You get Bride of Discord. This astonishingly extensive work by DisneyFanatic2364 can be found here

The story begins at the end of “The Return of Harmony”, with Discord fleeing before being returned to stone and deciding to lay low until he can come up with a new plan to take over Equestria. The Mane Six are on guard for his return but after three years pass without incident they believe he won't be returning and go on with their lives. On the night of the Grand Galloping Gala, Princesses Celestia, Luna and Cadence (who is with child) are called to Saddle Arabia to help with a strange storm, little realizing that something far more sinister is at work...

At the Gala, Fluttershy is talked into performing a song by her friends, which she just finishes when Discord reveals himself to the watching crowd and shows that he has captured the Princesses and removed their horns so they can't use magic to escape, after removing Twilight's own horn to prevent her from attacking him. After a night of spreading chaos, Discord returns to open negotiations for the safe return of the Princesses and for him stopping his chaos, and asks three things of acting ruler Twilight Sparkle: a promise to not use the Elements of Harmony against him, a piece of land where he can inflict his chaos undisturbed, and after some thought for the most shocking thing of all... a bride.

Even more shocking is that timid little Fluttershy, plagued by nightmares of Discord since his last defeat, actually agrees to be his bride. Astounded by this, Discord keeps his end of the bargain and releases the Princesses before spiriting Fluttershy away to his new castle where she is all but a prisoner to him. At their first dinner Discord decides to make a game with Fluttershy; each night he will ask her if she loves him, and if she says yes, then that night will be their wedding night. While to Discord it begins as a game, his efforts to get Fluttershy to love him soon result in a long buried heart making its way to the light...

In the background of all this, the rest of the Mane Six go about their lives as best they can, which includes them desperately wondering how to save Fluttershy and Applejack longing for a certain purple dragon...

From September 2013 to February 2015 an audio version of the story was posted on Youtube by the story's author.

It later received a sequel called Daughter of Discord

, focusing on the life of Screwball, the daughter of Discord and Fluttershy, who falls for the son of Queen Chrysalis after her powers attract the Queen's attention, putting the people she loves at risk. It also has an audio drama version, similar to the original story. Ccurrently a prequel series is in the works, that seems, based on previews released so far, to focus on the beginning of Applejack and Spike's family.

, where Discord kidnaps Spike, Rarity, Applejack, and Twilight to participate in a "game show" to resolve the Love Triangle between Rarity, Spike and Applejack.

The sequel has three sequels in turn: Son in law of Discord

, where Screwball and her changeling boyfriend Mothball are getting ready to take the next step in their relationship, only for Mothball's people to show up, asking him to become the new king; CMC: The Next Generation

, focusing on a new generation of CMC, formed after Rainbow's daughter Prism starts doubting herself and is informed by Scootaloo about the old Crusaders; and Hearth's Warming Chaos

, where Mothball tries to find a gift for Screwball. Meanwhile, Prism, the child of Rainbow Dash and Soarin', worries that they will not make it home for the holidays, while Discord tries to apologize to a filly who he accidentally told there was no such thing as Santa.

The story has also been translated in both French