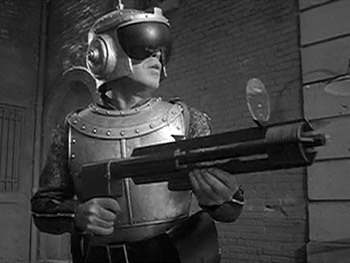 Depending on who you ask, meet the proto-Kyle Reese.
The Control Voice: Night comes too soon on the battlefield. For some men it comes permanently; their eyes never open to the light of day. But for this man, fighting this war, there is never total darkness. The spidery beams of light in the sky are the descendants of the modern laser beam — heat rays that sear through tungsten steel and flesh as though they were cheesecloth. And this soldier must go against those weapons. His name is Qarlo, and he is a footsoldier, the ultimate infantryman. Trained from birth by the State, he has never known love, or closeness, or warmth. He is geared for only one purpose: to kill the Enemy. And the Enemy waits for him…

Qarlo Clobregnny (Michael Ansara) and his nameless Enemy (Allen Jaffe), two Super Soldiers from the far future, stalk each other across a barren wasteland. Voices in their helmets command them to "Find your enemy! Attack! Kill!" As they rush each other, two colliding laser beams hit near them, which somehow plunges them both into a swirling time vortex. The Enemy's fate is described by the Control Voice, in a rare mid-episode narration:

The Control Voice: Time is fluid. The waters of forever close — and passage may not be completed. The present and the future are for a moment united. And the Enemy, half-today, half-tomorrow, is locked between…

The Enemy struggles against the time warp that entraps him, which is gradually dissipating. Meanwhile, Qarlo ends up on a city street in 1964, where one of the first things he sees is an elderly news vendor opening a bundle of newspapers with a knife. Feeling threatened by the "weapon", Qarlo attacks, causing everyone around him to panic. When the police arrive, Qarlo uses his laser rifle to disintegrate a squad car — but when they grab Qarlo and remove his helmet, the soldier's super hearing is overwhelmed by the sudden onslaught of loud city sounds, which weakens him enough for the cops to capture him and take him to a holding facility.

Since no one can understand Qarlo's futuristic language, philologist Tom Kagan (Lloyd Nolan) is called in to try to make sense of him. Kagan and his colleague, government agent Paul Tanner (Tim O'Connor), examine Qarlo and gradually figure out who and what he is. Kagan realizes that Qarlo has been bred purely as a killing machine, but he believes he can reawaken the warrior's humanity (even after Qarlo briefly becomes violent with him), so he persuades a reluctant Tanner to let Qarlo live with him and his family for a while. Meanwhile, the time warp that imprisoned the Enemy finally fades away; once free, he resumes hunting Qarlo.

Qarlo becomes an unlikely house guest for Kagan, his wife Abby (Catherine MacLeod), and their children Loren (Ralph Hart) and Toni (Jill Hill). At first, Kagan seems to be making progress with Qarlo, who relates the details of the dystopian future he comes from. However, the soldier eventually decides that "Trooper needs a gun" and breaks into a gun shop, where he grabs a powerful hunting rifle. Kagan talks Qarlo down before he can shoot anyone and takes him home, although the soldier insists on keeping the weapon. Just as Qarlo decides to stay with the Kagans because they are "not enemy", the Enemy tracks him down, blasting through the wall of the Kagans' house. Qarlo fights back, and as the Kagans watch helplessly, the soldier and his Enemy zap each other into nothingness.

The Control Voice: From the darkest of all pits, the soul of Man, come the darkest questions: Did the soldier finally come to care for those he protected? Or was it just his instinct to kill? Questions from the dark pit. But no answers. For answers lie in the future. Is it a future in which men are machines, born to kill, or is there time for us? Time. All the time in the world… but is that enough?