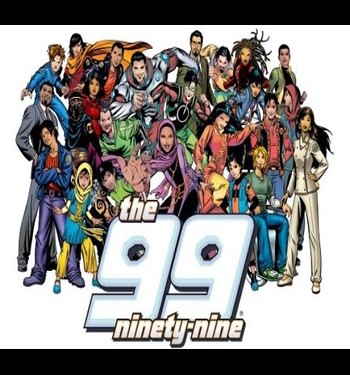 The 99 (Arabic: الـ 99 al 99‎), also written as The Ninety-Nine (Arabic: التسعة وتسعون al-tisa'a wa tisaun‎), is a comic book published by Teshkeel Comics, featuring a team of superheroes themed around concepts from Islam and its culture, specifically the ninety-nine aspects of God.

The series is a creation of Dr. Naif Al-Mutawa, founder and C.E.O. of Teshkeel Media Group. The creative team for The 99 is composed of comic book industry veterans such as Fabian Nicieza, Stuart Moore, June Brigman, Dan Panosian, John McCrea, Ron Wagner, Sean Parsons and Monica Kubina, all of whom have worked at both Marvel and DC Comics.

Although the series is based on Islamic concepts, it is promoted as appealing to universal virtues, and the religion of each character is not made explicit.