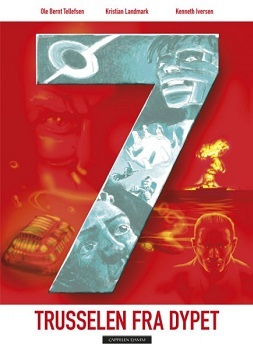 7 is a Norwegian superhero comic, and a very rare example of this genre played straight in Norwegian media. It is published as a series of graphic novels, of which two have been released so far: Trusselen Fra Dypet (The threat from the depths) and "Monstermanetene" (The Monster Siphonophores). It’s written by Ole Bernt Tollefsen and Kristian Landmark. The first volume was drawn by by Kenneth Iversen, the second was drawn by Iversen and Regine Holst. As of the third volume, Holst will be taking over art duties entirely
Advertisement:

The comic revolves around "The Chosen Ones" a small group of children aged 12 from around the world, all of whom are granted super powers that originated from the so-called Star People who visited Earth almost a thousand years ago. The Chosen Ones can only use their abilities between the age of 12 and 19, which according to the Star People, is the age when young people have the right balance between a sense of responsibility and a sense of idealism - and therefore is the age when they are at least likely to abuse their abilities. There are always just seven of them, and they all get their powers on the 21st of August every seventh year. When the Chosen Ones are about to reach 20, they must transfer their ability to the next kids in line, or it will be lost forever.

The Seven are guided by a secret organization known as The Rainbow Order. However, as the story begins, there are only six, because the seventh one is under the control by the Rainbow Order’s archenemies, The Black Order.