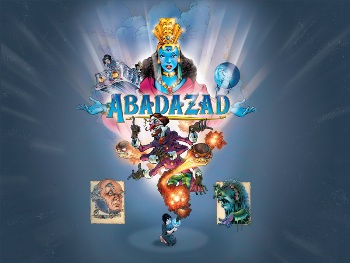 You know The Wonderful Wizard of Oz?

It turns out that due to Direct Line to the Author, Oz was... brightened up a bit for kids. Made safe. And the little girl who told the story of her adventures to the author was a little too black for that era to accept as the hero of a kids' book, so the author changed her into a little white girl.

We find all this out while reading Abadazad. Okay, so it's not the real Oz, but it's a brilliant and colorful Captain Ersatz of the place.

Kate was pretty young when her father abandoned her family and her mother started drinking. So she was pretty much responsible for raising her kid brother by herself. No wonder she felt so responsible over him getting kidnapped.

Only, thing is, he was actually taken to Abadazad. Kate only learns this a few years later from the woman across the hall in their apartment building — an old black woman who seems to know a little too much about those kids' books that have been around forever....

Oh, and this book you're reading? It's Kate's magic diary, which she gets shortly after entering the Magical Land. Sometimes it writes things for itself; things Kate shouldn't even know about.

The 2004 series was written by J. M. DeMatteis and drawn by Mike Ploog. The comic was published by CrossGen, which was bought out by Disney, who published a few childrens' books based on the comic.