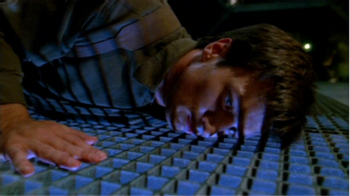 In this rather Anachronically Ordered episode, Mal attempts to repair the ship after a catastrophic engine failure. While this is happening, dueling Flashbacks explain How We Got Here as well as some Everyone Meets Everyone backstory.

When Mal bought Serenity, it was a wreck. Nonetheless it was love at first sight, despite Zoe's wariness. To get her in working order, Mal hires Wash (whom Zoe hates on sight) and a mechanic named Bester, who turns out to be incompetent. After Bester claims the ship is irreparable, Kaylee (with whom he had just been having sex next to the engine) fixes it in under a minute. She's offered his job on the spot.

Some unspecified amount of time later, Mal and Zoe are doing some crime when a gang tracks them down and demands their loot at gunpoint. Mal is suitably impressed that they were found at all, and Jayne, one of the gang members, takes credit. Instead of revealing where the loot is hidden, Mal bribes Jayne into defecting with a job offer. Mal rents out the shuttle to Inara, who accepts on the condition that he never to walk into her shuttle without permission, or call her a whore. This completes the crew as of the pilot episode, where Book, River, and Simon arrive.

In the present day, a fault in the compression coil (hinted at in the pilot) causes a huge explosion in the middle of Simon's birthday party. The blast injures Zoe and knocks out many of Serenity's functions, including life support and, fairly obviously, the ship's ability to move. Wash tries to stay by Zoe's side while Simon treats her, but Mal demands his help on the bridge, causing two shouting matches. Wash explains that they can't get any help because their course was designed deliberately to avoid contact with anyone, and Mal comes up with a kludge that would extend the signal while also forcing anyone who received it to pay attention.

Kaylee explains that the ship can't be fixed without a new catalyzer, meaning they are dead in the proverbial water. Crew morale dips as the ship gets colder and the oxygen supply deteriorates. Finally, Mal comes up with a last-ditch plan. Four people are sent on each shuttle in opposite directions with orders not to return unless told, leaving Mal on Serenity to wait for help. No one wants to leave him behind, but they eventually acquiesce.

Finally, another ship arrives. The captain is a Jerkass who brings a replacement catalyzer but decides to steal Serenity. Mal takes a bullet defending his ship, but manages to force the thieves off at gunpoint. [The episode actually starts here.] Wounded, he injects himself with adrenaline in the medical bay, trudges to the engine room with the new part, plugs it in, and limps up to the bridge to call back the shuttles. He doesn't make it, but he wakes up on Simon's table anyway. As it turns out, the crew decided to come back for him, in spite of their orders.