Series / The Worst Year of My Life, Again 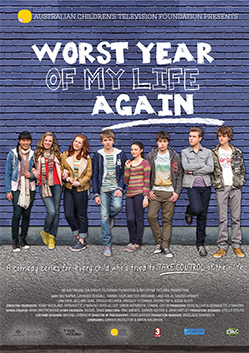 Alex King is an ordinary fourteen-year-old boy who has just had the worst year of his life. When he goes to bed the night before his fifteenth birthday, his only hope is that the next year will be better. In the morning, though, he discovers that time has reset itself; it’s his fourteenth birthday again, and he has to live through the entire awful year all over again. He quickly realises that this “loop year” allows him to use his knowledge of the future to change certain events. With the help of his two best friends, Simon Birch and Maddy Kent, he tries to avoid the school bully, Parker, win the heart of Nicola Grey, the most popular girl in school, and make it the best year of his life instead. At least, that’s what he hopes will happen, but nothing goes to plan...
Advertisement:

The Worst Year Of My Life, Again is an Australian children’s comedy show airing on ABC 3 in 2014, with thirteen episodes. It stars Ned Napier as Alex, Laurence Boxhall as Simon and Tiarnie Coupland as Maddy.