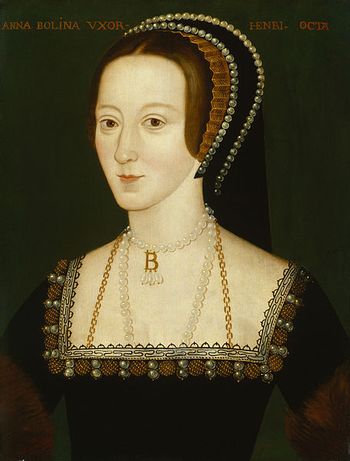 "The scandal of Christendom."
—Catherine of Aragon
"I have never had better opinions of woman than I had of her."
—Thomas Cranmer
Advertisement:

Anne Boleyn (c. 1501note the longtime myth that she was born in 1507 has been fairly conclusively disproven – 19 May 1536) was Queen of England from 1533 to 1536 as the second wife of King Henry VIII, and was mother of Elizabeth I. There are few people in history who were and are as polarizing as Anne Boleyn. During her lifetime she was both much maligned and much admired. To Protestants she was the equivalent of a Saint, while Catholics detested her. Nowadays lines are drawn again, although now her supporters and detractors look more at her personality and deeds as Queen - or as a fictionalized character.

Anne grew up as the (probably younger) daughter of the ambitious diplomat and courtier Thomas Boleyn, who when she was around 12note a letter from Anne to her father dated c. 1514 was almost certainly written when she was around thirteen secured for her a post as maid of honour to Archduchess Margaret of Austria, regent of the Low Countries. From there, she traveled to France to attend Princess Mary of England as she married the French King. After his death and Mary's departure Anne became a member of the court of Queen Claude of France. Heavily influenced by French culture and fashion, she made a splash at the English court when she returned in 1521. Five years later she came to the notice of the very married (and very Catholic) King Henry VIII - and what happened after that has been hotly debated for centuries.

There are currently two common narratives. The traditional story, popular with Whig historians desperate to justify Henry VIII's actions, is that Henry would never have left poor innocent Katherine had that crafty, ambitious Jezebel Anne not seduced him. In this view Anne set out to marry the poor besotted Henry from the very beginning, using her feminine wiles (teasing him, leading him on, refusing to be his mistress and instead 'holding out for marriage') to break up a happy family specifically so she could be Queen. Unfortunately this comfortable and smug tale must contest with the fact that Henry was known to have had doubts about his marriage as early as 1515, or six years before Anne Boleyn even returned to England and a good ten before he fell in love with her. This leads to the second common narrative: that Anne, ambitious but not foolhardy, was at the start a victim of what was basically workplace sexual harassment. She didn't hold out for marriage as much as she refused to become Henry's mistress and was stunned when he went further and all but ordered her to become his Queen. This narrative has Anne making the best out of a bad bargain.

Whichever story one believes, the result is that Henry decided he would marry Anne and to that effect petitioned the Pope to annul his marriage to Katherine on the basis of consanguinity. Ten years earlier he might have succeeded but with the troops of Charles V (Katherine's nephew) threatening Rome again and with Luther standing on the sidelines taunting the Church over its immorality Pope Clement was hardly going to accede to Henry's wishes - or reject them entirely, as Henry was also one of the Pope's only political allies. So he stalled, and hemmed, and hawed, and probably prayed one of the parties would just die before he was forced to make a decision; Henry, tired of waiting, finally broke with Rome, had his marriage to Katherine annulled in England, and married Anne in either November 1532 or January 1533.

Was Henry influenced by Anne's reformist ideas? It's a good question. The Whigs, desperate to discover a whiff of Protestantism in the stridently ultra-Catholic if non-papal Henry, believed she managed to turn his heart toward the new faith, but the evidence we have suggests that Henry only cherry-picked what he could use from reformist thought to get what he wanted - which was all Henry ever really cared about, stories of heirs and England's future notwithstanding.

Henry's expectations that the world would go his way at long last were dashed when instead of the hoped-for son Anne gave birth to a 'worthless' daughter (the future Elizabeth I). This must naturally have been a blow to the King, but what eventually led to him falling out of love with Anne is debatable; certainly the numerous miscarriages Anne suffered after Elizabeth's birth had something to do with it, but a factor not taken into consideration by Whig historians is that Anne basically organized the early Church in England on her own, taking much of the work off Henry's shoulders and gaining a great deal of political power in the process. Henry, a lazy man who loathed governing, was prone to lifting men up to do the work and then banishing or killing them when that work led them to become too powerful. This trait of his may have influenced Anne Boleyn's fate as much as it did Wolsey's, More's, Cromwell's, and even Gardiner's.

As Queen, Anne may have thought she had some amount of protection, but in truth, she was far more vulnerable than Katherine had ever been; the general population seems to have disliked her, she had no powerful foreign relatives willing to declare war if she was deposed or worse, and her abrasive, brittle temperament alienated many members of the court not in her clique, including Henry's close friends Charles Brandon and Francis Bryan. Katherine's death in January 1536 made her even more vulnerable, as the Catholic world now saw Henry as unmarried; if only the 'concubine', as she was known, could be gotten rid of, Henry could contract a legal marriage and be returned to the fold.

Matters came to a head in the spring of 1536. Nobody now knows who was behind the decision to get rid of Anne, but by the end of April the court was as tense as a bowstring. Loose words by Anne - asking if courtier Henry Norris was waiting for the King to die so he could marry her - set the plot in motion. Two days later Anne was arrested along with five men, including Norris and Anne's own brother George, and charged with adultery, incest, and treason. (Many writers have had Anne charged with witchcraft, but this is incorrect; although Henry did say after her arrest that he thought Anne had bewitched him, the lawyers who drew up the warrants knew that such a charge would not fly with the hard-headed Kentish jurors who would first hear the case.)

Anne defended herself well in court, as well she should have; modern scholarship has found that most of the charges of adultery were logistically impossible, Anne not even being in the same county as her supposed paramours on most of the dates given in the warrants. Nevertheless she and her codefendants were still convicted and sentenced to death because that's what Henry wanted. The men were beheaded on Tower Hill on May 17, but Henry paid the exceptionally talented Executioner of Calais to travel to London and behead Anne two days later on Tower Green with a sword - a seeming gesture of mercy, until you realize that for him to reach England on time Henry must have sent for him before the trial. That Henry, always the gentleman.

Once Anne was dead Henry had her letters and other writings destroyed, her portraits burned, her jewels reworked, and even her plate melted down. We consequently know less about Anne than we should, especially given her influence on the Church of England.

Given her popularity with writers who fancy themselves historians, there are probably more myths and urban legends surrounding Anne Boleyn and her downfall than about any other figure in English history. No, she did not have six fingers on one hand or a mole on her chest or, as the Book of Lists invented, a third breast - since we don't have contemporary images, it's not easy to reconstruct what she looked like, but contemporary accounts seem to attest that she was of average appearance. No, she was not accused or convicted of witchcraft. No, her sister-in-law Lady Rochford did not testify against her husband (it was Lady Worcester). No, she did not commit adultery. No, there is no evidence Mary Boleyn was the mother of Henry VIII's children, and quite a bit of evidence against it. And on, and on, and on. Suffice to say that the reader who believes pop "historians" like Alison Weir might be better off reading something by a real, trained historian.

Tropes associated with Anne Boleyn as portrayed in fiction:

Portrayals of Anne Boleyn in fiction: