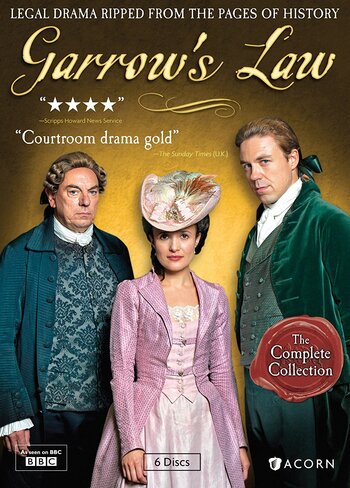 The stage is the Old Bailey, Georgian England. The plot is whatever case happens to be the most entertaining or scandalous that day. The opportunities prisoners have for defence counsel are minimal, the chances of conviction extremely high. The jury (and the audience; yes, the miserable plight of some being, as always, a ready source of entertainment for others) is rarely sympathetic. The punishments for even petty crimes are usually severe, such as being forcibly branded in court. The sentence for the poor schmuck in the dock? Quite often death. And the worst part? This is all pretty much Truth in Television.

But hey, at least the lawyers are making a bundle.

In a period where it really wasn't fun if you were the one on trial - then again, when is it? - and even less so if you were poor (which you so often were) there were several things sadly missing from the legal system, such as adequate cross-examination, the right of representation for all whether or not they could afford it, and the concept of being innocent until proven guilty. There was, however, William Garrow, who planned to do something about remedying that.

Mind you, there's also the problem of his snobbish colleagues, such as silver-spoon-in-a-certain-orifice Silvester, who looks down upon him because of his common background and the fact that he didn't go to Oxford, and never pass on the chance to impede his progress. Then there's Garrow's mentor, John Southouse, who shares a tumultuous father/son relationship with his former apprentice but now finds himself more and more in his pupil's shadow, both exasperated and impressed by the methods Garrow uses to get his results.

And even despite those methods Garrow would often be lost without the aid of Lady Sarah Hill, who's spotted a like-minded soul in the tempestuous lawyer and quietly helps Garrow to push for social change since, as a woman, she can't very well do it herself. What with Garrow being hopelessly in love with her and hints at her returning the sentiment, it's a shame she's already married, and to a man who really does not like Garrow at that. Guy just can't catch a break.

Add in some poor unfortunate souls as supporting characters, court cases based more or less completely faithfully on real trials recorded in the files of the Old Bailey, a more than solid script, spiffy costumes and a cracking cast, and you more or less have Garrow's Law. The first series (2009) spanned only four episodes but they were a pretty stellar four hours, and the second series (2010) was also excellent. A third series, also of four episodes, finished airing in 2011.