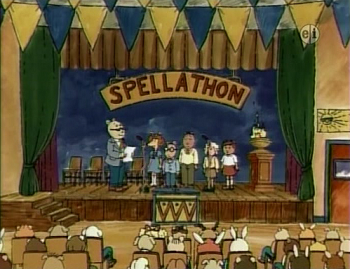 Where the main characters include at least one kid, a common plot is for them to participate in a school spelling bee. Basically any kid sitcom or cartoon is going to have an episode of this.

Basically, it is a competition where the competitors are asked to spell some of the most obscure, arcane words in the language. Very popular in English-speaking countries due to the fact that English has some of the most convoluted spelling rules and one of the largest vocabularies of any language, with words (and pronunciation) borrowed from nearly every language on Earth. To do well in an English bee requires a very good memory, and a passing knowledge of every language on the planet. They're also popular in China, Korea, and Japan (for writing out archaic characters), and the Francophonie (La Dictée, note It is more of a speed stenography and grammar test, with the judges reading out a long passage and the contestants writing it out. This is much more difficult than it sounds as many grammatical elements in French are spelled but not pronounced (e.g. the different forms of the verb danser: dansait, dansais, dansaient, danser, dansez, dansai are all pronounced the same). But for speakers of languages with more regular spelling rules, this exercise would seem rather pointless.

Spelling bees are Serious Business in Hollywood, which will usually give them more coverage than school athletics. The rules are also generally not the same as Real Life spelling bee rules. (Yes, spelling bees happen regularly in reality, although they're generally more mundane and low-profile than fictional versions.) Similarly, while real life spelling bees do tend to use Player Elimination, fictional portrayals are far more likely to come down to a tight final two, whereas in real spelling bees, it's feasible for the last handful of losers to drop in the same round.

."note without, y'know, looking at how we just spelled it

The McGee family participate in a spelling bee hosted by Libby, but can't seem to spell "Hanukkah" right.

The McGee family participate in a spelling bee hosted by Libby, but can't seem to spell "Hanukkah" right.