Film / Akeelah and the Bee 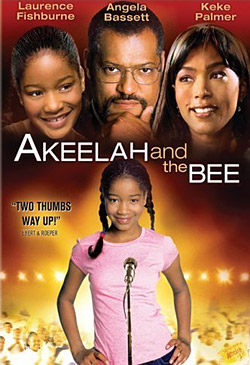 "Our deepest fear is not that we are inadequate. Our deepest fear is that we are powerful beyond measure. We ask ourselves, Who am I to be brilliant, gorgeous, talented, fabulous? Actually, who are you not to be? We were born to make manifest the glory of God that is within us. And as we let our own light shine, we unconsciously give other people permission to do the same."
—Akeelah (quoting Marianne Williamson)
Advertisement:

A 2006 academic drama film staring Keke Palmer, Laurence Fishburne and Angela Bassett, and it just might be the only Spelling Bee drama out there.

Akeelah (Keke Palmer) is a young black girl from South Los Angeles, trying to cope with her father's death and her stifling environment. She's quite intelligent, but performs poorly in school due to the work being boring and unchallenging. Principal Welch wants her to enter the spelling bee and work her way up to the Scripps National Bee because their school's funding was severely cut due to low test scores, leaving the school in squalid conditions. She's entered into her school spelling bee in order to avoid detention for missing school, and she easily wipes the floor with the competition, almost bored out of her mind by the ease and simplicity of the words. Dr. Larabee (Fishburne), an English professor, sees her potential and begins to coach her for the more advanced Regional Spelling Bee. Hesitant at first, Akeelah shrugs off his help, fearing that performing well will isolate her and label her as a "brainiac", but her love of words can't be denied, and so she agrees to compete. After barely scraping by the district bee (advancing to the next round only because her older sister sees a parent in the audience mouthing the answer to her son), Larabee begins intense practice, having her not only memorize words at a blinding pace, but also having her become familiar with etymology and the ways that words are constructed.

Akeelah meets Javier Mendez, a competitor at the regional bee, and befriends him. She learns that the Spelling Bee is more than just spelling words; it's competitive parents, cutthroat rivalries, and massive pressure. Akeelah learns about Dylan Chiu, two-time runner up at the National Bee, whose father won't settle for anything less than first. Akeelah's mother Tanya (Bassett) finds out about the bee and forbids her from continuing with it; she doesn't want Akeelah to waste her time with this when she should be completing school work. Her best friend Georgia begins to feel left out as Akeelah spends more of her time studying for the bee and hanging out with Javier than her, and their relationship grows strained.