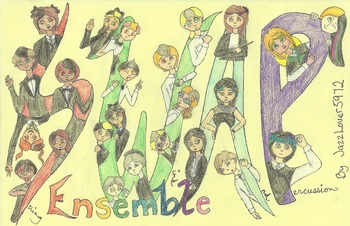 A webcomic created by JazzLover5972 (formerly PinkPeonyPie5972), also known as Phily K. Illagan. It is hosted on DeviantArt. It began on July 16, 2014. The entire structure is inspired by Battle for Dream Island.

Caroline Doctrina starts an odd music program called SWAP (String, Wind, And Percussion) Ensemble under the orders of Tierney Cabalbag. Those who participate must come to rehearsals every day of February for two hours. There is a big solo, but everyone wants it, so they must settle it with a contest. However, not every challenge has to do with music.

Childhood friends reunite, Clashing Cousins fight, and new relationships form as the competition goes on. Meanwhile, Caroline tries and fails to keep her patience with the kids and her superiors while she runs the show.

You can view the comic here