Series / Get a Life 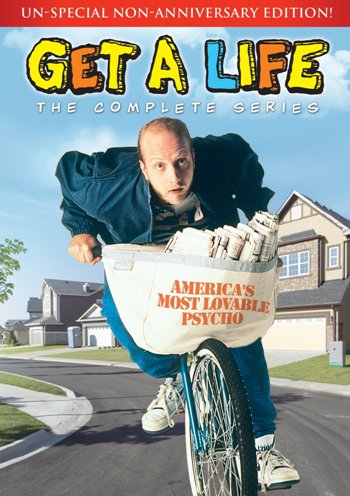 Get a Life was a demented, surreal 1990 sitcom that aired on Fox. It starred Chris Elliott as Chris Peterson, a friendly yet slightly psychotic 30-year-old paperboy and all-around loser who lives with his parents. The show followed Chris' strange adventures, which included becoming a male model, stalking beautiful women, and rescuing vomiting aliens.

Needless to say, the darkness and weirdness of the show got it cancelled after two seasons even as it received excellent critical reviews, but it gained a cult following in that time and after years of DVD sets for the show being stuck in Development Hell (due to show-runner David Mirkin's insistence that all episodes be released uncut, including the music), a complete series set was finally released by Shout! Factory on September 18, 2012.