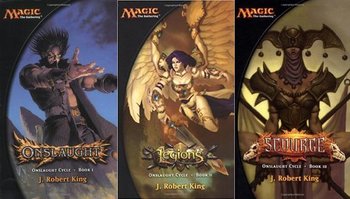 This cycle of Magic: The Gathering novels is the sequel cycle to the Odyssey Cycle and similarly corresponds to the Onslaught block in the card game. The Onslaught Cycle (composed of three novels: Onslaught, Legions, and Scourge) also takes place in the continent of Otaria and immediately picks up where the original trilogy left off. Series protagonist Kamahl has retreated into the Krosan Forest following the corruption of his sister Jeska, who has become the powerful Cabal pit fighter Phage. In the meantime, small-time Master of Illusion Ixidor is cast into the desert to die and gains Power Born of Madness. From there, the story chronicles the further rise of Phage and Ixidor's champion, the avenging angel Akroma. Otaria's story is concluded in this cycle, though it would later be briefly revisited in the Time Spiral Cycle.

Has nothing to do with the 1996 Crisis Crossover Onslaught.

The Onslaught Cycle provides examples of the following tropes: