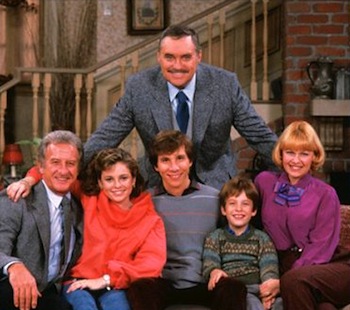 A Dom Com developed and executive produced by Frank Dungan and Jeff Stein, produced by their production company, Lazy B/F.O.B. Productions, and 20th Century Fox, and airing on ABC in The '80s, about a posh British butler being employed by an otherwise typical American Nuclear Family. The Belvedere character had been created by novelist Gwen Davenport in her 1947 book, Belvedere, and portrayed by Clifton Webb in a trio of late-'40s and early-'50s films.

In the series, butler Lynn Belvedere (Christopher Hewett), struggles to adapt to the Owens household. The breadwinner, George (Bob Uecker), is a sportswriter. His wife Marsha (Ilene Graff) is attending law school. At the show's start, oldest son Kevin (Rob Stone) is a senior in high school, daughter Heather (Tracy Wells) is a freshman, and Wesley (Brice Beckham) is in elementary school. Over the course of the series, George becomes a sportscaster, Marsha graduates from law school and starts a career as a lawyer, Kevin leaves for college and gets his own apartment, Heather moves up in high school and is a senior by the show's final season, and Wesley is in junior high. In the two-part series finale, Mr. Belvedere marries and moves to Africa.

A number of episodes played on the dynamic between Mr. Belvedere and Wesley. Several times, Wesley was annoyed or irritated about something or another with the butler ... and once even tried to have him deported. But when things truly mattered, the two became very close friends and could rely on each other to help the other out in their time of need.

The series spanned six seasons from 1985 to 1990.note The first season only had seven episodes, due to premiering as a Midseason Replacement for Webster, which was moved up half an hour earlier in a time-slot shift with Benson. It returned to the air in reruns on FamilyNet in October 2011, and can currently also be seen on Antenna TV.