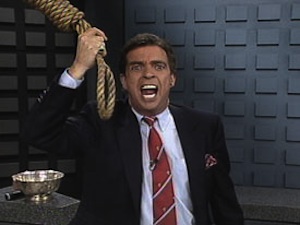 Downey in a typically calm and contemplative moment.
If you think Primetime Sitcoms and Soaps are a snooze,Explanation Accompanied by scrolling ZZZZZZZs and sounds of ZZZZZZZs on a black background and the Movies bore you to tears,Explanation Accompanied by BOOHOO and sounds of a BOOHOO on a blue background then watch the man who will excite you and incite you: Morton Downey Jr.! Weeknights at 9 p.m. on Channel 9!
—Original WWOR-TV promo.
Advertisement:

Take the most insane parts of trashy talk shows, add a large helping of conservatism and couple it with a chain-smoking loudmouth host and an audience that was just as obnoxious as him, and you have The Morton Downey Jr. Show, a syndicated Talk Show that aired from 1987 to 1989 and was hailed as the progenitor of "trash television".

The show was hosted by Morton Downey Jr., an acerbic, chain-smoking commentator who previously worked in the radio field. Downey was approached by a New Jersey television station, WWOR-TV, in October 1987 to create his own local program. What followed was a nightly talk show where Downey would interview known pundits, politicians and plenty of wacky guests while being openly hostile to them.

Many episodes would culminate in Downey and his guests getting into shouting matches or screaming at each other face-to-face, and in some rare situations, tensions escalated to outright violence. In addition, the audience members (frequently referred to as "The Beast") were just as antagonistic as Morton himself, and would get up to rail at guests for their inadequacies and faulty arguments.

Many celebrity guests appeared on the show, including the Reverend Al Sharpton, Lloyd Kaufman, Ace Frehley, Congressman Ron Paul and many others, and the show tackled controversial subjects like abortion, HIV, race relations and the death penalty.

However, as the show entered its second season (having begun national syndication via MCA/Universal, which owned WWOR at the time), the quality of the guests waned and ratings faltered, leading it to be canceled in June 1989. Its impact on the genre influenced later "trash talk shows" like Jerry Springer, and it even inspired a character in the form of Morton Koopa Jr. in the Super Mario Bros. video game series.note Morton is the only one of the seven Koopalings who is not named for a musician.

A documentary detailing the popularity of the show and the impact it had on Downey's life, Evocateur: The Morton Downey Jr. Movie, was released in July 2013.

Compare Hot Seat With Wally George, a West Coast precursor with a tenth of the budget.