Series / Mozart in the Jungle 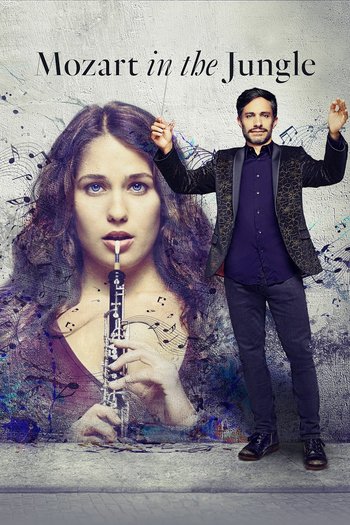 Mozart in the Jungle is an American dramedy series about classical musicians in New York City, which streamed for four seasons (2014–18) on Prime Video.

Young, eccentric celebrity conductor Rodrigo (Gael García Bernal) replaces the aging Thomas (Malcolm McDowell) as conductor of the New York Symphony. Struggling oboist Hailey (Lola Kirke) catches a big break when Rodrigo is entranced by her last-minute audition, but an embarrassing blunder during her first rehearsal reveals that she still has much to learn.

The backstage lives of musicians is the main focus of the show. Hailey and her fellow Starving Artists juggle what gigs they can find — giving lessons to hormone-crazed adolescents, playing in the band for terrible Jukebox Musicals — with fanatic amounts of practice as they try to refine their craft. The orchestra higher-ups, meanwhile, must endlessly butter-up the wealthy patrons who underwrite the orchestra.