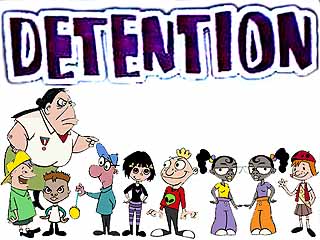 "As long as we're in school, we're gonna get in trouble!"
— The theme song, Detention
Advertisement:

Detention is a short-lived animated series that aired on Kids' WB! from 1999 to 2000. Lasting for just 13 episodes, it's one of the shortest-lived cartoons to ever come out of Warner Bros. Animation. Animation is provided by Wang Film Productions, with a similar animation style close to their work on Tiny Toon Adventures, Taz-Mania, Animaniacs and Pinky and the Brain.

The show centers on a group of preteen students at Benedict Arnold Middle School who engage in all sorts of wacky hijinks during their everyday lives; but try as they may, they simply cannot avoid being put in detention by the end of the school day. There, they are kept under the strict supervision of Eugenia P. Kisskillya, a former Marine Corps sergeant who is also the school's gym teacher.

The show is now on iTunes since 2018, after several years of unavailability. A DVD Release by Warner Archive followed on May 21, 2019.

The kids the show focuses on include: