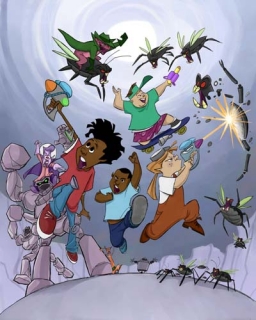 Da Boom Crew was a very short-lived 2004 cartoon series created by Bruce Smith (The Proud Family) that aired on Kids' WB!. Thirteen episodes were made, but the show was such a ratings disaster that only four of them were aired in the United States; the last nine aired (un-dubbed) in the United Kingdom. The entire series is streaming on Tubi TV and Amazon Prime with the Ameba addon.

The plot: Four children create a homemade video game, and a power surge throws them into the game. The show details their adventures in this parallel world. They embark on a quest to find their missing game cartridges and stop the villain Zorch from taking control of the cosmos.