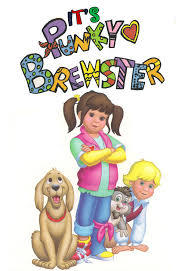 Punky Brewster is an animated TV series produced by Ruby-Spears that originally aired from 1985-1986 on NBC. It is an Animated Adaptation of the sitcom of the same name, with the main cast of the sitcom reprising their roles.

Punky Brewster is a Heartwarming Orphan who lives with her foster father, a photographer named Henry, and her dog, Brandon. Her friends include Cherie, klutzy Allen, and spoiled rich girl Margaux. In the animated series, the children have extraordinary adventures usually involving the new member of the cast, a magical alien named Glomer (Frank Welker). Glomer is a magical creature called a glomley from Chaundoon, a land within a rainbow, who was stranded in the human world when the rainbow disappeared without him.

The series was billed in some places as It's Punky Brewster to distinguish it from the live-action version, but the on-screen title was always just "Punky Brewster".

In 1989, selected episodes were run on a rotating basis in the syndicated series Maxie's World.