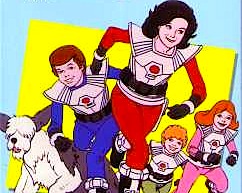 Merchandise-Driven Saturday Morning Cartoon created by Ruby-Spears that ran on NBC for the 1986-87 television season. The show was created primarily to sell items from Worlds of Wonder's Lazer Tag game.

In 2061, master criminal Draxon Drear and his henchcreatures the Skugs are trapped in suspended animation beneath the Atlantic Ocean, after the Skugs damage the shuttle Drear was using in an attempt to escape to Mars.

In the year 3010, 13-year-old Jamie Jaren is the champion of the popular sport of Lazer Tag. She is also the only person with the ability to use the StarLyte (the name, both in-show and in the toy line, for the "gun" used in the game) as more than a toy, primarily as a kind of telekinesis and, more importantly, to travel through time. At least, she is until Draxon Drear is discovered and released from his suspended animation.

Drear, realizing the potential of the StarLyte, promptly steals one, takes himself and the Skugs back to the past, where he intends to murder the Starlyte's eventual inventor, who happens to be Jamie's distant ancestor. Needless to say, Jamie takes it upon herself to travel into the past to defend her ancestral family from Drear's machinations.