Every Pizza Is Pepperoni 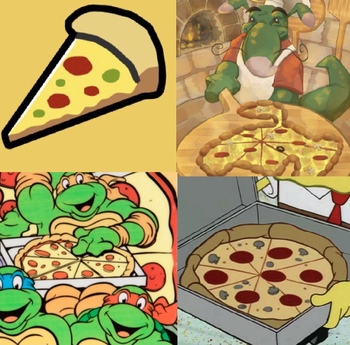 Think about pizza. What kind of toppings would you put on it? Pepperoni? Only the most popular choice! And in fiction, apparently the only choice you have.

You may have noticed that, especially in cartoons and video games, whenever there is pizza, unless its toppings are specifically called out (and sometimes even if they are) it will always be a pizza with red spots on it, maybe with the occasional mushrooms or green veggies. It seems as if the general image of pepperoni on pizza is so entrenched in our expectations that generic background pizza always looks like pepperoni pizza.

Another possible reason this is a thing in drawn media specifically is it's easier to make a pizza look like a pizza by drawing pepperoni on it. While pepperoni pizza can be seen in live-action works, you're more likely to see a variation simply because it is easy to identify a real pizza as pizza regardless of the toppings.

The only other toppings that seem to be mentioned are anchovies, for a classic "Hold the anchovies" joke, or starting in The New '10s, pineapple as toppings, owing to a common belief that the flavors of pineapple and pizza are a poor match for one another due to the moisture of it dampening the crust and the sweetness overtaking the other flavors of the mozzarella and other toppings (in fact, pineapple on pizza just might be the most popular unpopular opinion).

A Sub-Trope of Stock Food Depictions. Compare Cartoon Meat and Cartoon Cheese for tropes about the same concept for when meat and cheese are not on pizza. See also Hold the Unsolicited Ingredient for when anchovies (or some other bizarre topping) are mentioned to specifically not be put on the pizza.