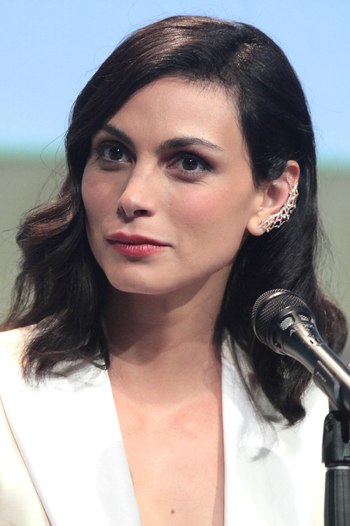 "The dream as an actor is being able to bounce back and forth between different things."
Advertisement:

Morena Silva de Vaz Setta Baccarin (born June 2, 1979 in Rio de Janeiro, Brazil) is a Brazilian-American film and television actress best known for roles in several American science fiction television series: as Inara Serra in the series Firefly and the follow-up film Serenity; as Adria in the series Stargate SG-1 and the follow-up film Stargate: The Ark of Truth; as recurring character Erica Flint in The Mentalist and as Anna in the 2009 version of the series V. She co-starred as Jessica Brody in the Showtime series Homeland. She has also voiced several DC-Comics characters.

She was married to director Austin Chick and they have a son, Julius. However, she became romantically involved with her Gotham co-star Benjamin McKenzie, causing Chick to file for divorce, and she gave birth to her daughter, Frances, with McKenzie on March 2, 2016. The pair got engaged in November 2016, and married the following year. The couple welcomed son Arthur in March 2021.