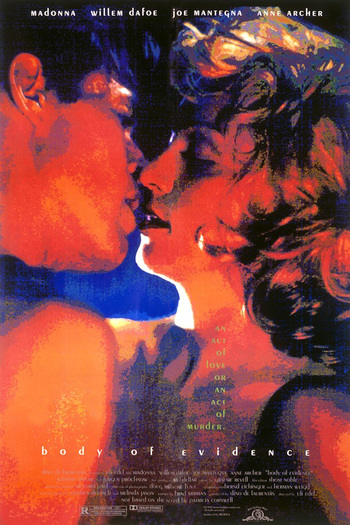 An act of love or an act of murder
Advertisement:

The plot concerns the murder trial of Rebecca Carlson (Madonna), who is accused of murdering an elderly millionaire with a combination of cocaine and vigorous sex until he died of a heart attack. Carlson is represented by her attorney Frank Dulaney (Dafoe), who is drawn into a torrid sexual affair with her as he tries to prove her innocence.

Made on the heels of Basic Instinct, the film also played up Madonna's then obsession with explicit sex in her works, coming out just three months after the Erotica album and her pornographic coffee table book Sex. The original cut of the film received an NC-17 rating in the US, but was cut down to an R rating for a theatrical release.

Not to be confused with the forensic drama Body of Proof.