All spoilers for Xenoblade Chronicles are unmarked. You Have Been Warned! 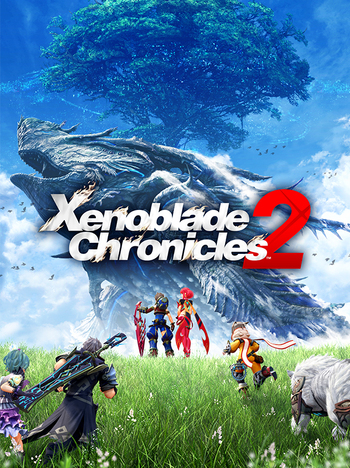 Let's be off... to Elysium!
Amongst the mist I see a stretching path.
Reaches out so far.
Beyond what I can see.
How far would I be walking till I reach the end?
The end of the path is to be seen.
— Drifting Soul
Advertisement:

In the world of Alrest, the last remnants of civilization live on the backs of colossal beasts called Titans, which swim on the surface of an endless ocean of clouds. However, one after another the Titans are reaching the end of their lifespans, whereupon they sink into the depths of the Cloud Sea; and with the increasing scarcity of livable land, the various nations of the Titans are growing uneasy and edging closer to war.

Rex is a young man who works as a salvager, diving into the Cloud Sea to retrieve and sell the various pieces of crap and ancient technology that lie within. One such lost technology are the Blades, which are sentient weapons that bond with their user ("Driver") and fight in tandem. One day, Rex is hired by a mysterious organisation to help retrieve one of the rarest Blades of them all: an "Aegis"-class Blade named Pyra. Rex ends up becoming bonded to Pyra, and together they embark on a world-spanning quest to reach her place of birth: Elysium, a mythical land of plenty said to exist at the top of the World Tree, with enough livable space for all. This being a Monolith Soft game, it turns out things are a LOT more complicated than that.

Reeling after the disastrous failure of the Wii U, Nintendo executives turned to Monolith Soft, having seen what they could do with their previous games, and requested that they make a game that could show off the graphical muscle of their upcoming next gen console. Despite their team being reduced to around 40 people due to the rest being assigned to work on the next Zelda game and a short time limit of a little over two years, they absolutely did. Unlike the more Space Opera-oriented Xenoblade Chronicles X, this sequel follows up on the more Science Fantasy-oriented setting of the original Xenoblade Chronicles, though it still features new characters and a setting separate from the original.

This game is notable among Monolith Soft's catalogue in that while most of their games tend to suffer from being acclaimed flops limited to Cult Classic success at most, Xenoblade 2 quickly went on to be the most successful title they've ever developed, and one of the most successful RPGs released for the Nintendo Switch outside of the mainline Pokémon games. This, combined with Shulk's presence in the Super Smash Bros. series, caused a huge surge in interest in the previous games, finally bringing the Xeno series to comparative mainstream popularity and cementing Monolith's place among Nintendo's most loved and respected studios in the eyes of fans.

In September 2018, a Prequel Expansion Pack titled Xenoblade Chronicles 2: Torna ~ The Golden Country, which received a digital and physical release.

The game is followed up by Xenoblade Chronicles 3, which connects the futures of this game and the first installment.

Pyra and Mythra (and Rex) were announced as playable Downloadable Content fighters in Super Smash Bros. Ultimate, and joined the roster on March 4, 2021, helping revitalize interest in the game and the franchise as a whole just as Shulk did for the first game.

Think you can take these tropes?:

open/close all folders
A to C
D to G
H to M
N to R
If I could climb up to the top, would you be waiting at the top?
S to Y
Pyra: That was wonderful, Rex!
Rex: R-really? I'll try even harder for the next one, just you wait!
Feedback

Elira takes the opportunity to mock her audience.

Elira takes the opportunity to mock her audience.