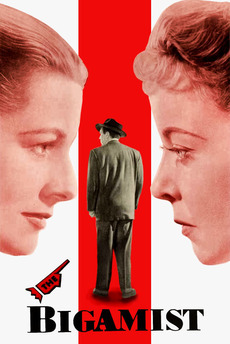 The Bigamist is a 1953 Film Noir directed by Ida Lupino, who also stars in it along with Joan Fontaine, Edmond O’Brien, and Edmund Gwenn.

Travelling salesman Harry Graham (O’Brien) and his business partner/wife Eve (Fontaine) want to adopt a child. They are all set to go for the adoption and only need the adoption agent, Mr. Jordan (Gwenn), to do a thorough investigation into their pasts. Eve is completely untroubled while Harry is acting increasingly suspicious.

Mr. Jordan snoops around, finding information about his office and work colleagues in Los Angeles, and eventually finds Harry living in a house with a child and wife in tow.

The shocked Mr. Jordan demands an explanation, and Harry tells him the story of how he met Phyllis (Lupino).

This film is in the Public Domain.