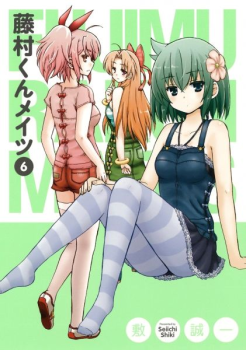 Haru Fujimura is a delinquent who skips school because he cannot make any friends. One day, Class Representative Usami Eriko note Not of his class comes after him to convince him to go back to school. And how does she do it? By threatening to color his cat's nipples black. Well, not really, she convinces him to go back to school by becoming his first friend. Though it turns out that not only is she the representative of a different class, she is VERY interested in becoming a different sort of friend, and doesn't hesitate to let him know. Add in a male class representative who walks around in a horned helmet, and a half-Japanese female class representative who insists on speaking mangled English, and Fujimura finds himself the only sane man in a world full of cloudcuckoolanders.

Fujimura-kun Mates is a manga by Shiki Seiichi, full of random humor, an Unwanted Harem, and very impressive leaps of logic.

Compare and contrast with D-Frag!, another comedy manga about a delinquent meeting a cast full of oddballs, but replacing the harem and rom-com antics with more screwball misadventures in and outside school.

Tropes in Fujimura-kun Mates include: