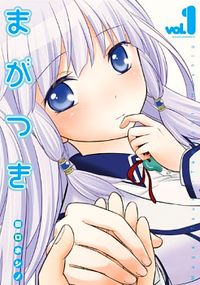 One day, Yasuke Arahabaki was working up the courage to confess his feelings for his childhood friend Akari Inamori. It was the perfect opportunity, since the two of them were going to eat dinner alone together at his family's shrine. Before dinner, he rushes through the daily shrine rituals and accidentally breaks a sacred mirror.

Tsuhime Seori, a goddess who looks like a cute girl, curses him for it, and now he will die if he's ever separated from her. All too late, he learns that she's a goddess of misfortune, and horrible things happen around her whenever she's upset. Will he be able to get the goddess to lift the curse? And how will he ever explain this to Akari?

This manga contains example of: