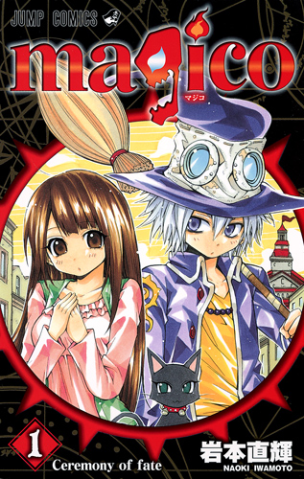 magico is a shonen manga by Naoki Iwamoto, which was serialized in Weekly Shonen Jump from February 2011 to July 2012 and collected into eight volumes.

As soon as 16-year old country girl Emma arrives at the city of Hawk Eye, every man in the city falls madly in love with her. The king in particular tries to force her into marriage... and then a sorcerer kidnaps her.

The sorcerer introduces himself as Shion, one of the youngest and most talented in the nation. He explains to Emma that she is cursed with the Echidna, a mysterious magic that happens every 500 years where a girl is born with her heart packed with such powerful dark magic that it has the potential to destroy the world. With the Echidna, one could rule the world, and Shion explains that people are going to try and hunt her down to get her heart.

However, just when Emma has given up on living a normal life, she is told that there exists a ritual that might rid her of the Echidna curse: Magico, which consists of many difficult trials... the first of which requires Emma and Shion to marry each other.

Do note that the official spelling

of this manga's name is with a lower-case M as "magico". That is not a typo.