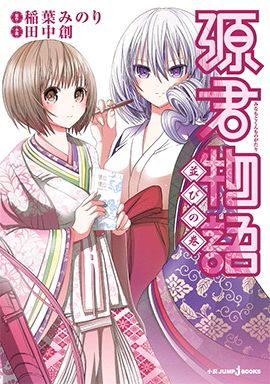 And these are the Protagonist's relatives! Imagine the rest of the girls in the story...* (From left): Asahi Momozono and Kaoruko Fujiwara, his cousin and aunt, respectively.
The goal of my research is to get a deeper understanding of "The Tale of Genji", and for that, I need someone who understands what Prince Genji went through.
— Kaoruko Fujiwara

A modern-day re-imagining of The Tale of Genji by Inaba Minori. Terumi Minamoto is a young man with a face pretty enough to make people think he is a girl. During his middle school years, Terumi was bullied by women who were jealous of his face and as a consequence, developed a fear of women, to the point of attending an all-boys high school to escape his trauma.

Prior to attending Shiun University, however, he decides to overcome this fear and become someone who can have sex with any woman he wants but almost immediately after deciding this, his father informs him that he is remarrying and that since their apartment is only big enough for two people, Terumi needs to move out. Terumi's father arranges for him to move in for the time being with his aunt, Kaoruko Fujiwara.

Kaoruko just happens to be one of the most beautiful women in the university, who has done much literary work using The Tale of Genji as a base, and is admired and respected by people of both genders. When Terumi arrives at her apartment, she quickly guesses that he was bullied due to his face and that he doesn't have any experience with women. Thinking it would be too boring for him to just lounge around the apartment she offers to help him get over his fear, in exchange of becoming her guinea pig for her research in her "Reverse Hikaru Genji Plan".

Helping him have sex with 14 women shouldn't be too much trouble...right?