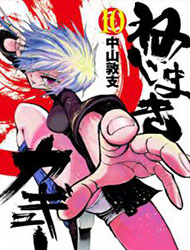 Nejimaki Kagyu (lit "Wind Up Snail") is a manga by Nakayama Atsushi (also author of Uratarou), publishing from June 2011 to April 2014.

It follows the story of a teacher named Negizawa Kamo who long ago made a promise to a childhood friend that he would become a great teacher and stand up to bullying. Years later he succeeds in becoming an educator but seems to have gained an odd curse of attracting the majority of the female student body who will do anything to gain his attention, most of which end in violent means. During his first day on the job while trying to get to school, he encounters said childhood friend, Kagyu Jyubee, who has come back from training to enroll in his school and help protect his promise he made.

However some of Kamo's more dedicated admirers likewise have their own set of skills, and won't let him go without a fight.

Nejimaki Kagyu has the following tropes: