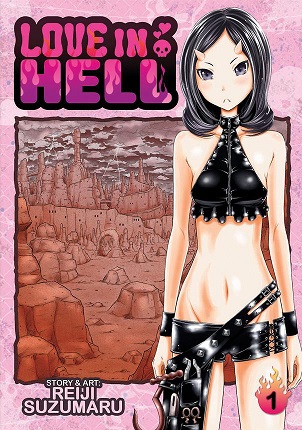 Love In Hell is a manga series by Reiji Suzumaru, which ran in in the now defunct Comic High from 2011 to 2013. It's licensed in English by Seven Seas Entertainment.

The series revolves around Rintaro Senkawa, a man in his mid-twenties, whose unremarkable life was cut short due to getting drunk one night and falling on his head. Despite claiming not to have committed any egregious crimes in life, he finds himself naked in Hell greeted by a demon girl named Koyori. Koyori informs him that he is a sinner now and has to stay in Hell until he atones for the sins he has committed.

In Hell, atoning for one's sins means to suffer. Sinners must endure horrific punishment administered by their assigned demon over and over again (any wound heals the next day) until they have completely atoned for their sins and then get to go to heaven. Suffering isn't just for atonement however, it's also how they get paid. It turns out hell is a lot like the real world, and just like the real world, one needs money to buy things like food, clothing, and other amenities. So for Rintaro to get out of hell and have a somewhat comfortable stay there, he's looking at a lot of painful deaths.

The manga has a sequel, titled Love In Hell: Death Life, with a new demon and a new sinner (and new problems). It ran in Action Comics from 2015 to 2017.

Love in Hell provide examples of: