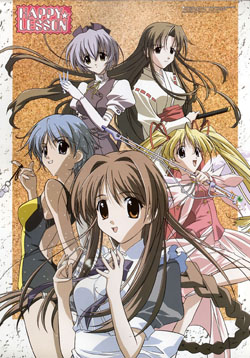 Chitose's Moms have got it goin' on
"Roommates? Mothers?! Times five?!? And they're my teachers too?!?!"
Advertisement:

Teenaged orphan Chitose Hitotose hates the world and goes through the motions of life. Concerned about his dropping grades, his homeroom teacher stops by for a visit and discovers that he lives alone—thus the solution must be to move in with him and become his new mother! Hilarity Ensues, particularly when more teachers get into the act.

Happy Lesson is an Affectionate Parody of the Harem Anime genre that illustrates what it would really be like to live with a Rag Tag Bunch Of Misfits who all have their own ideas about what being the "perfect mother" is about.

The original comedy manga was written by Mutsumi Sasaki and drawn by Shinnosuke Mori, serialized in Dengeki G's from 1999 to 2002. In 2001, it was adapted into a 5 episode OVA. A 13 episode TV anime was produced in 2002 and followed by its sequel series Happy Lesson Advance in 2003. In 2004, a second, 3 episode OVA series titled Happy Lesson: The Final was released. Some lesser known Dreamcast games were also made.