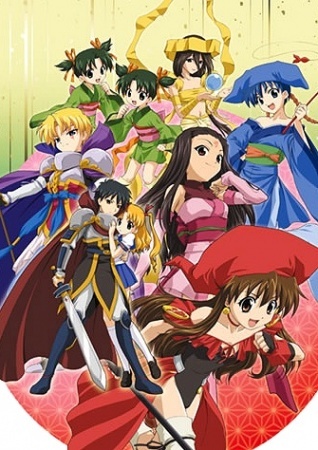 Happy Seven is a 13-episode Magical Girl anime. It covers the story of Amano, a girl who has had bad luck all of her life. Desperate, she meets the girls (and a boy named Kikunosuke) of a school club called "Better Fortune Research Organization" to see if they can help. She later finds out that they form a group of magical girls called Happy Seven, representatives of the Seven Gods of Luck. They Fight Demons called the Magatsugami while preventing Kokuanten, the princess of destruction, from gaining power from the red star, a meteorite. This series is unconventional in that the heroine is not a member of the titular Happy Seven, and has lots of cute moments...though the ending is a bit of a Mind Screw.