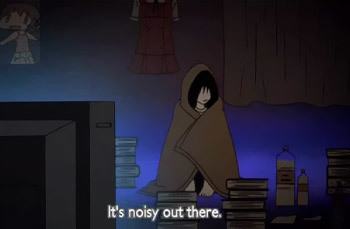 No man is an island, but a hikikomori is a peninsula. A hikikomori is a specific, extreme form of The Shut-In who hasn't left his bedroom for a ridiculously long time (like, at least six months).

While Hikkomori was initially considered to be specific to Japan, the phenomenon started to the observed in the West around the time of the 2007-08 financial crisis, which forced many precarious young people to move back in with their parents. The country also has a competitive university entrance competition and business culture that many younger people found themselves disillusioned with in the wake of the crisis.

See also The Hermit (who might be a hikikomori but just as often isolates himself for more esoteric or spiritual reasons); Basement-Dweller (who doesn't have mental problems, he's just a lazy mooch who won't grow up); Daytime Drama Queen (a Western version who's not addicted to nerdy stuff, but Soap Operas); and Crazy Survivalist (who withdraws from civilization because he thinks it's about to collapse). See also Loners Are Freaks and Bullied into Depression. If someone literally can't leave their house (and usually they want to), it's an Enclosed Space or Implicit Prison.