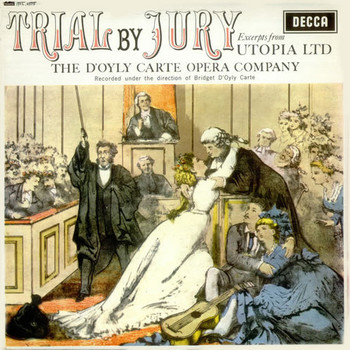 A comic opera in one act by Gilbert and Sullivan, their second collaboration and oldest to survive intact.note The libretto for Thespis survives, but most of the music has been lost. First produced in 1875, humorously dramatizing an action filed in the Court of Exchequer by Angelina against Edwin.

Cause of Action: Breach of Promise of Marriage.

Pleadings: Defendant pleads that he was acting as a "love-sick boy" who left the plaintiff after he grew bored with her. Plaintiff is, by her own admission, "no unhappy maid," but nevertheless charges the defendant with having cruelly deprived her of his love.

Issues: "A nice dilemma we have here." May the defendant propose to marry the plaintiff today and marry his intended young lady tomorrow, or does marrying both count as "Burglaree"?

Finding: The jurymen find they "haven't a scrap of sympathy with the defendant." After further deliberations, jury find that they love the plaintiff fondly. The Judge ultimately can find no time to address all the pleadings.

Holding: Every gentleman of the jury wants to hold the fair plaintiff in his arms. The Judge awards her an embrace of his own.