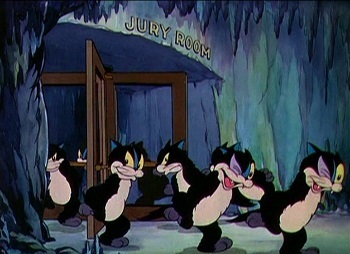 Are we even sure there's a room behind that door?
Judge Alvarez: Mr. Foreman, has the jury come to a decision?
Foreman: Oh, yeah. In the hall on the way to the jury room.
— The George Lopez Show, "George Testi-Lies for Benny"
Advertisement:

The closing arguments are over, and the defense attorney retires to a meeting room to discuss the case and possible outcomes with his or her client.

Only after a short amount of dramatic dialogue, a court aide or other supporting character comes back and tells the defense that deliberation has concluded and the verdict is to be read.

Causing people in and out of universe to exclaim "Already?"

Since jury trials include a great deal of information (opening arguments, the testimony of multiple witnesses, cross-examinations, and so on), jury deliberations, which should review all this material as well as instructions from the judge, are expected to take considerable time. When a jury returns a verdict in half an hour or less, this trope is in effect.

There are several possible reasons for the rapid deliberation:

In news coverage, reporters tend to assume this trope is operating. It's common for news reports to say "just" or "only" when noting how long deliberations took, as if they expected them to be out longer.

Can happen as part of a Kangaroo Court. Often practiced by a Joker Jury. May also figure in a Miscarriage of Justice. A trial for a Frivolous Lawsuit should be this assuming the jury isn't stupid or rigged. A Rogue Juror can subvert this trope.

While this can be Truth in Television, please think twice before posting Real Life examples.

Some hours pass, and eventually the jury foreman must report that they cannot reach a verdict.