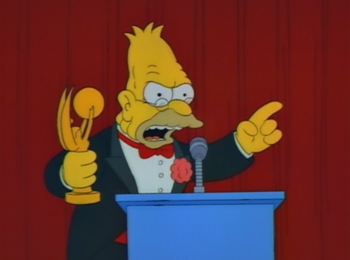 "I think all you people are despicable. For shame!"
After watching a mediocre episode of The Itchy and Scratchy Show, Bart and Lisa decide that they know enough about the show and what's funny to pen their own episodes, but after getting rejected by Roger Meyers, Jr. because of their age, the duo use Grampa Simpson as a front. Meanwhile, Homer and Marge go to their high school reunion, where Homer is revealed to have never graduated because he failed remedial science and goes to night school to make up the lost credit.