Film / The Land Beyond the Sunset 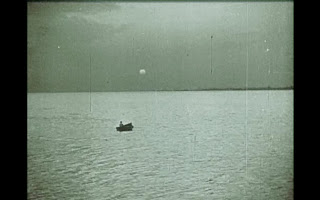 Where he lived happily ever after.

The Land Beyond The Sunset is a 1912 film from Thomas Edison's studio that feels decades ahead of its time. Joe is a young boy living in the depths of poverty in New York, eking out an existence selling newspapers, going home to a filthy little apartment and a grandmother that beats him. One day, a well-dressed lady on the streets gives Joe a ticket to an outing organized by the Fresh Air Fund, a real-life charity which still exists

, which takes inner-city poor kids on trips to the countryside.

Joe and the other kids go on an outing to the country, where they have a picnic. They listen to a fairy tale (acted out onscreen) in which some kind fairies save a boy from beatings by an evil witch, and put him in a boat which they sail to "the Land Beyond the Sunset". Joe, remembering how his grandmother beats him, hides and stays behind as the other kids leave. He makes his way down to the beach, where he sees a boat. Inspired, Joe gets in the boat and drifts away.

This moving, heartbreaking film was inducted into the National Film Registry.