Visual Novel / Hush Hush - Only Your Love Can Save Them 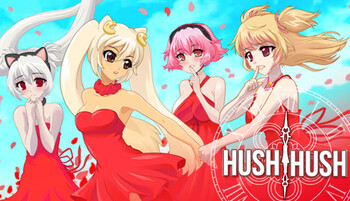 Only your love can save them
Advertisement:

Hush Hush - Only Your Love Can Save Them is a visual novel/management simulator created by Sad Panda Studios, the team behind both Crush Crush and Blush Blush. Following a Kickstarter campaign that was fully funded in three days and broke numerous stretch goals, a demo of the game was released during the 2022 Steam Next Fest, with an Early Access release on August 22, 2022, and a version 1.0 still upcoming.

This visual novel has no connection whatsoever to the novel by Becca Fitzpatrick.