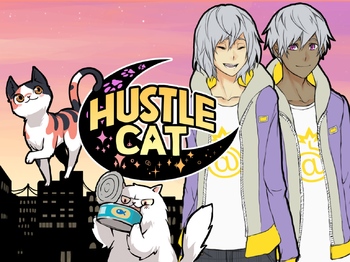 Hustle Cat is a visual novel published by DateNighto

, released March 2016 after a successful Kickstarter

The game follows the story of Avery Grey, a recent high school grad staying at their aunt's house in the city. Avery hasn't quite mastered this whole "growing up" thing, but makes a semi-valiant effort to find a job (in between eating pizza and watching cute cat videos...) with little luck. While out on a walk, they stumble across a cat cafe, and the place is hiring! But there's definitely more to the place than meets the eye...

One notable aspect of the game is that the main character is presented as gender non-binary and with several semi-ambiguous models to chose from. Chosen pronouns are actually an configurable setting that can be changed mid-game if the player so desires. This choice was in part to try a different method of fostering character-player connection, vs. the "Nilla Wafer hero"

Tropes found in Hustle Cat include: