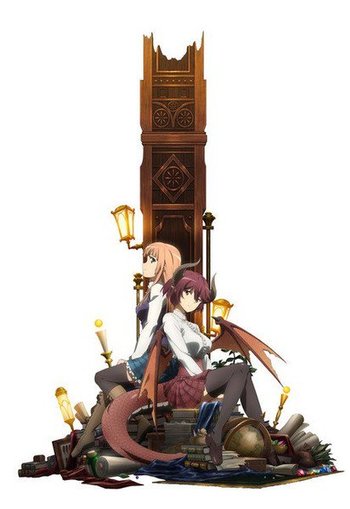 Anne and Grea
Mysteria Academy is a Wizarding School where the races of Men, Gods and Demons, who are normally at war with each other, come to learn magic in peace without discrimination. Among its students are Anne, a human princess and honor student, and Grea, a half-dragon girl. Together, they spend their days learning about magic, and more about each other.
Advertisement:

Mysteria Friends is a short format anime adaptation loosely based on the popular "Mysteria Academy" event in Cygames' Rage of Bahamut social game (and which has also featured in Granblue Fantasy) which aired during the 2019 anime season, consisting of ten fifteen-minute episodes. Production is handled by Cygames' anime studio CygamesPictures and directed by Hideki Onamoto. Although it takes place in the same world as Rage of Bahamut: Genesis, they are completely separate stories.

This anime is famed for its Troubled Production: originally announced in 2015 under the title Rage of Bahamut: Manaria Friendsnote Manaria is the school's name in the original Japanese, but has been localized as "Mysteria" in all localized Cygames properties, in 2016 it was delayed indefinitely and all of its staff were moved to other projects for unknown reasons, leaving its future uncertain. In October 2018 it was re-announced with its current title and staff for release in January 2019, with its first episode being screened at Cygames Fes 2018 on December 15, 2018.

The anime is licensed by Sentai Filmworks and is available for streaming at Crunchyroll.