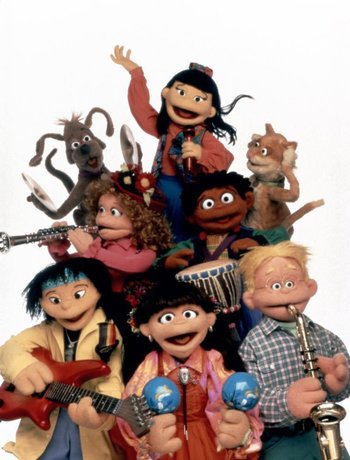 The Puzzle Place is a Puppet Show for children that aired on PBS Kids, and was produced by Lancit Media (the same company behind Reading Rainbow) and KCET Los Angeles. It ran for 75 episodes over 3 seasons that originally aired from January 16, 1995 to December 4, 1998 (the pilot episode aired on KCET and KLCS, on September 15, 1994), with reruns airing until March 31, 2000. Created in the wake of the 1992 Los Angeles riots, it features a group of children from differing racial and ethnic backgrounds who hang out together at the titular Puzzle Place, where they learn to work out their problems and disagreements in a peaceful, constructive manner.

Also in the cast: a cat and dog named Sizzle and Nuzzle, who were usually the focus of the B-Plot and spent most of their time in the basement. There's also the multicolored gibberish-speaking Piece Police who run the place.

"We're tropin' to the Puzzle Place!":