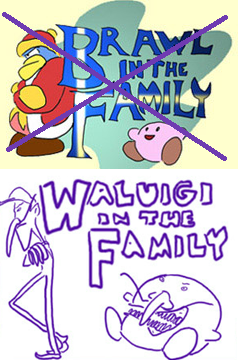 Name: Wilma. I'm what's known as a "takeover artist", wanted in 30 states for hijacking fiction. [You've] probably seen my face at the post office for terrorizing those book-of-the-month-club romance novels. Now, if this is the first time you've had a story hijacked, well buckle up, 'cause I'm. In. Charge.
— The Female Narrator, Plumbers Don't Wear Ties

A Hostile Show Takeover is an episode in which a (lead) character is somehow indisposed, and the rest of the cast scrambles to oust that character, taking over the role or pitching their own concept in a quickly created audition.

This probably requires the characters to actually be aware they're in a show, at least for that episode, but comes up in cartoons frequently.

Hopefully, we won't have to deal with this here. Waluigi once tried to take over this page, and we had to send him elsewhere. He might be still lurking around here, though.

Bill takes over the theme song for the Grand Finale arc of Gravity Falls, when Weirdmageddon is unleashed.

Bill takes over the theme song for the Grand Finale arc of Gravity Falls, when Weirdmageddon is unleashed.