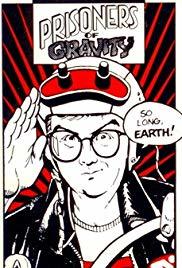 Prisoners Of Gravity was a Canadian TV show that ran from 1989 to 1994. The basic premise has a sci fi nerd named Commander Rick who grows disgusted with the pollution, war, and predjudice of the Earth. So he does what any rational person would do: loads all his possessions into his car, straps a rocket engine on, and takes off into space!
Advertisement:

He doesn't get very far, crashing into a communications satellite. Somehow he's able to survive there (they don't really go into it). The satellite also has a very advanced AI, Nano Cybernetic Computer (NAN-CY for short), and Commander Rick is able to use her to hijack the signal for a corny nature program called "Second Nature With Enrico Gruen" and put on his own show, where he interviews various science fiction writers and comic book creators. Usually every episode will have some sort of theme to it, such as "Censorship," "Fans," "Violence," etc.

The rights to POG are in some sort of limbo, so for now you can enjoy them only on the internet, where episodes can be found easily on Youtube or the TVOntario archives website