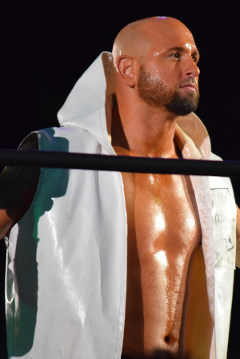 Not here to kiss ass.
Advertisement:

Despite being sidelined for a year with his first concussion early in training in 2000, he resumed his training in 2001 and was able to officially begin his wrestling career in 2002. He spent the next three years working under his real name as one of the young lions of the two Ohio-based wrestling companies under whose schools he trained, the Heartland Wrestling Association and the Northern Wrestling Federation. In October 2005, he found himself wrestling at the National Wrestling Alliance's annual convention, drawing the NWA's interest and being invited to further his training at their Los Angeles dojo and begin working for NWA on the West Coast. He accepted, starting with NWA at the beginning of the new year.

Allegra was soon repackaged as "The Machine Gun" Karl Anderson, a distant relative of Arn Anderson's kayfabe wrestling family, as they felt he had an "Anderson style" to his work. The Anderson family association was gradually dropped as he came into his own as a wrestler. By 2007 he formed a team with "Magnum" Joey Ryan called "The Real American Heroes", and outside the NWA began working for Pro Wrestling Guerilla and picking up big victories over the likes of Frankie Kazarian and Colt Cabana.

In early 2008, the NWA developed a new talent exchange agreement with New Japan Pro-Wrestling, leading to Anderson traveling to Japan in March to replace Yuji Nagata in the New Japan Cup. Despite being booked to lose his first match, his performance impressed NJPW officials so much they offered him a one-year contract, which soon came with a spot as a midcard worker in their Great Bash Heel stable, eventually becoming the regular tag team partner of fellow stablemate Giant Bernard, previously known as WWF/E midcarder Prince Albert/A-Train. In 2009, sometime after nearly all of GBH trading in Togi Makabe and Tomoaki Honma to become Chaos with Shinsuke Nakamura and Toru Yano, Anderson and Bernard became known as Bad Intentions and began challenging frequently for the IWGP Tag Team Championship. However, it wasn't until after getting kicked out of the stable altogether and turning face that they successfully captured the titles, held them for over a year and a half, and became arguably the greatest gaijin tag team in New Japan's history. Shortly after their reign ended on the January 4 Wrestle Kingdom show in 2012, Bernard left NJPW to return to WWE.

On his own, Anderson's star only ascended further, reaching the finals of various tournaments in 2012 and even winning the World Tag League as part of the tag team Sword & Guns with Hirooki Goto. However, through 2012 and 2013, his attempts to challenge after IWGP Championships such as Hiroshi Tanahashi's IWGP Heavyweight Championship and the Killer Elite Squad's (Davey Boy Smith Jr. and Lance Archer) IWGP Tag Team titles, always came up short. It was the green light for a behind-the-scenes friendship to become a collective heel turn and faction on-screen that allowed Anderson to become a part of history, when May 3's Wrestling Dontaku saw Anderson and Tama Tonga join Prince Devitt and Bad Luck Fale in their attack on Tanahashi, officially founding the force that would become known as Bullet Club.

Despite the Club being centered around Devitt as the leader, Anderson quickly became the group's main handler of the microphone, and both men had their turns going after what was now Kazuchika Okada's IWGP Heavyweight Championship. For the G1 World Tag League that year, Anderson brought in Doc Gallows, a big man known for his stints in WWE and TNA, to be his tag team partner. Instant chemistry and success followed, as Anderson and Gallows won the 2013 World Tag League tournament, then went on to beat KES at Wrestle Kingdom VIII to become IWGP World Tag Team Champions. When Devitt left NJPW and was replaced by AJ Styles at the April 6, 2014 Invasion Attack show, Anderson was considered by NJPW to be the official leader of Bullet Club despite Styles becoming its most elite wrestler, effectively forming a Big Bad Duumvirate. Throughout the next couple of years, Anderson and Gallows would gain back and lose the IWGP Tag Team titles three times and Anderson would remain the primary voice and co-leader of Bullet Club along with Styles as it soared in popularity both in its native Japan and especially in many of its members' homeland in the United States. In February 2016, Anderson left NJPW with Gallows, a month after Styles had gotten kicked out of Bullet Club to do the same, ceding full leadership of the group to Kenny Omega.

Anderson debuted in WWE with Luke Gallows eight days after WrestleMania 32, and very quickly they made their intentions known: to reform their alliance with AJ Styles and take over WWE. Styles took some convincing initially, but eventually he agreed. Taking over, however, was a different story. While he and Gallows did win the WWE Raw Tag Team Championship twice, their WWE run is mostly considered less impressive than their NJPW run as they failed to establish a dominant force before being ultimately released in 2020 due to WWE having to downsize as a result of the COVID-19 pandemic shutdowns.

Following their departure from WWE, Anderson and Gallows began teasing joining numerous companies, Anderson's primary focus being on a return to NJPW, before The Good Brothers revealed in the summer that they'd signed with Impact Wrestling on a two-year deal that would allow them to also sign part-time with NJPW once borders were open.