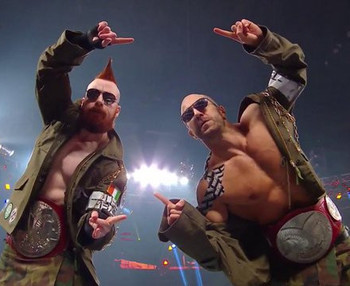 The Bar is a Professional Wrestling Tag Team in WWE composed of Sheamus and Cesaro in 2016.

They were initially feuding with each other, and their rivalry turned so hot they were forced to participate in the best-of-7 series to win a title shot, but Mick Foley forced them to team up with each other after what would've been the deciding 7th match ended in a no-contest. At first, they were bickering all the time, but eventually warmed up to each other. Since then, they became one of the flagship teams of the New Era, alongside rival team The New Day.

Unfortunately, after their involvement in WrestleMania 35, Sheamus picked up an injury, and the Superstar Shakeup sent Cesaro to Raw as a singles star, where he then announced that The Bar was over, splitting the team.

These tropes don't set the bar, THEY ARE THE BAR!