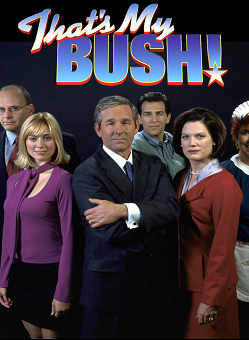 "One of these days, Laura, I'm gonna punch you in the face!"
— George W. Bush in the style of Ralph Kramden
Advertisement:

The series portrayed the President as a likable buffoon who fell into one "Fawlty Towers" Plot after another, supported by his equally wacky staff and family.

Despite expectations for satire on political events, which had become the hallmark of South Park, the show focused more on being a parody of 1980's sitcoms humorously transplanted into the unlikely location of the White House. For example, the "wacky neighbor" stock character was transplanted unchanged, despite the illogical nature of the White House having a next door neighbor who could occasionally drop by unannounced. Parker and Stone planned the show before the 2000 election under the name Family First, planning to use whoever got elected as the main character (for those who are interested, had a few thousand votes in Florida gone the other way this article would probably be titled Everybody Loves Al, the working title in the case of a Gore victory). Once Bush was elected, they took advantage of his suggestive name and changed the title to a sexual pun.

Much of the show's humor came from raunchy or shocking humor contrasting or parodying the show's old-fashioned format. The President's Catchphrase, above, spoofs the classic Catchphrase from The Honeymooners, drawing attention to the blase disregard many old sitcoms had for domestic violence (it was played as if he had said something endearing, and was always followed by a cheering and laughing mock-Studio Audience). One episode employs a double Three Is Company plot: George's canker sore prevents him from performing certain husbandly duties, prompting Laura to conclude that age is starting to show on her anatomy, and when George overhears the Zany Scheme she contrives to address this problem, he mistakenly concludes that she wants him to euthanize their cat. There's even An Aesop at the end: Use your mouth, instead of beating around the Bush. As well as the sitcom plots, each episode did touch on a topical issue that was of particular relevance at the time (episodes revolved around the abortion debate, the War on Drugs, the Strategic Defence Initiative and oil drilling in Alaska), but these were usually used to add to the absurdity of the tropes of sitcoms rather than as the focus of satire. Most episodes had An Aesop that compromised on both liberal and conservative ideals, arguing that both sides have valid points and that neither is completely correct.

The show achieved solid ratings, but failed to match the success of South Park. Few conservatives gave the show a chance, and liberals were disappointed by the lack of satire or simply didn't get itnote To be fair, Bush had only been in office for about three months at that point, so it was probably far too early for a full-blown spoof of his presidency anyway. Ultimately, the network decided that the ratings didn't justify the show's high production costs, and cancelled it after an eight week run. Parker and Stone admit that the idea didn't have long-term potential, and they were already starting to run out of ideas when the show was cancelled. Contrary to common belief, the show was not cancelled in the wake of 9/11, but a good two months prior. (However, the events of September 2001 pretty much ruined any hope of the show being Un-Cancelled.) For a while there were rumors of an Action-Adventure movie called George W. Bush And The Secret Of The Glass Tiger, but it never came to be. Series star Timothy Bottoms would go on to play Bush in two movies.

At the time, a show featuring a sitting president seemed like a novel concept, but it would only be the first of several large productions to feature George W. Bush as the main character. The animated series Lil' Bush re-imagined Bush and his political allies as children similar to The Little Rascals. Oliver Stone went on to make a feature film biopic of Bush before he had even left office. Jon Culshaw took the idea for his short-lived ITV sketch show, which featured a series of sketches titled "My Two Presidents" that parodied sitcom tropes from the 1970's and 1980's.