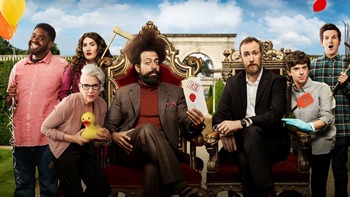 Taskmaster is an American adaptation of the UK-hit Taskmaster with Reggie Watts taking on the titular role. He was assisted by franchise creator Alex Horne, reprising his role from the original series. The show aired for one season on Comedy Central in 2018.

This series transplanted the original format in broad strokes, even reusing tasks used previously on the British version. Like all versions of Taskmaster, celebrity contestants are asked/forced to take part in various challenges that appear straightforward, but sometimes require a lot of lateral thinking to complete.

Major changes from the original format include a running time being cut from 45 minutes to 21, the prize task changing from a scored round to the contestants each taking turns to donate an item to be used as an episode's prize, and the teams tasks being dropped entirely (although one team task from the UK version was adapted into a solo task).

The format didn't catch on with America audiences, with the adaptation lasting for one season before Watts confirmed that it had been cancelled

. Rights to air the British show were bought by the CW in 2020, with reruns starting from Series 8; after low viewing-figures, however, the show was taken off air and relegated to the CW's streaming service.

Tropes specific to the US version of Taskmaster