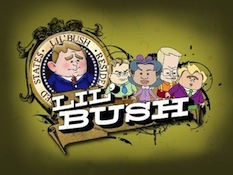 Lil' Bush began life as a series of five-minute videos distributed on Amp'd Mobile cell phones before moving to Comedy Central in a longer and more elaborate format. It is essentially a Spinoff Babies work for Real Life.

It features George W. Bush, his cronies, and various other political figures as Super-Deformed grade-school versions of themselves. This show takes place in an Alternate Universe where most current American politicians are children, the elder George Bush is President, and currently current issues are introduced in accordance with the Rule of Funny.

Almost every corner of the show is crammed with references to current (and not-so-current) political events, as well as pop-culture shout-outs and exactly one musical number. Even though many jokes walk the line between Refuge in Audacity and Dude, Not Funny!; when it's good it's really good. Lil' Bush did not fare well with critics, but it did manage to turn many of its characters, especially the four main kids, into interesting and entertaining characters in their own right. Unfortunately it managed to get put on the air just as Bush's administration was wrapping up, and Barack Obama becoming president, making the show no longer relevant, and its expiration date set. The show holds up much better now that there is some time put between it and the many other Bush satires of the time, this paired with the unique art style and appealing character designs has gained it a small cult following.